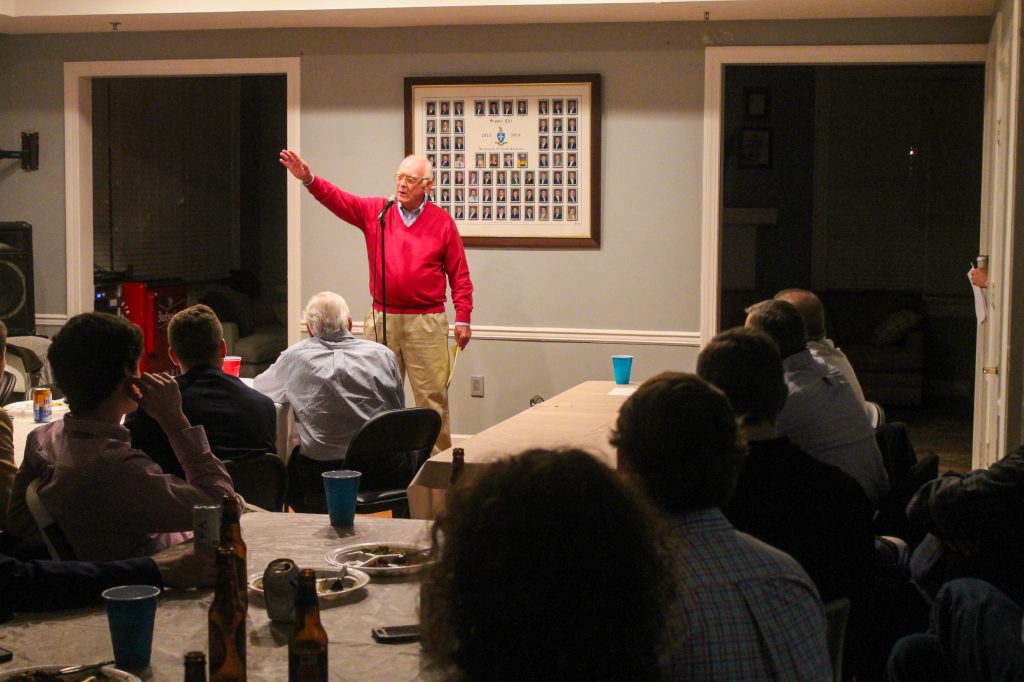 The Lowdown took place for the second year in row, and again proved to be an incredible night. This event for the alumni of Sigma Chi Alpha Tau pulls triple duty as a reunion, revival, and night of epic storytelling. The Lowdown is a chance for both alumni and students to share their stories about their time together, and to (re)connect with one another. The stories range from ridiculous, to riveting to downright raucous.

Over twenty alumni and more than 40 students gathered at The Chi Bag in Chapel Hill on Friday November 17th, which turned out to be a warm Fall evening and perfect for socializing. We brought in tasty BBQ from a local favorite, The Q-Shack, with ample supplies of beverages on hand. 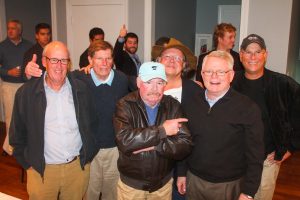 The crew to honor Johnny Sparrow

The evening began differently than the previous year, and took on a special significance. Instead of jumping directly into storytelling, the Chapter took the opportunity to honor Johnny Sparrow’s decades of service to the fraternity. Bill Moesta, the Grand Praetor for the Eastern North Carolina Province (and for those of you who have no recollection of what that means – that’s our region’s representative to the national fraternity), honored Johnny with a Grand Praetor Citation. What made this portion of the night even more special were the amount of alumni from Johnny’s class that came from across the country to join in the celebration. Pics of his crew below.

In a surprise move, the House Corporation has officially named the chapter room as “The Sparrow Chapter Room”, with a new plaque to be installed to commemorate his service. Even more surprising was a $10,000 donation from an alumnus to the House Corp, made in Johnny’s honor. This donation makes an immediate impact, as we’re still making improvements to the House, including a kitchen renovation.

Finally, the chapter presented both Joel Miles and Johnny Sparrow with a special Sigma Chi ring.

The Lowdown is funny

The evening then shifted into storytelling mode, with Will Sheppard serving as emcee. Will did an incredible job not only moving the night going, but keeping the audience entertained with his homespun charm, ridiculous stories, and self-deprecating sense of humor.

Sharing alumni stories that night were Joel Miles, Jay Hemphill, Zack Hamm, Matthew Davis, and Tom Picha. We heard about pledging during the 60’s (wow), a reason not to let strangers in the house, how not to beat your brothers at the James Bond video game, and much, much more.

Students Matthew Mengret, Dash Sperling, and Nick Sabbagh also recounted tales from a recent Spring Break episode, the night after winning the national championship, and the decades old rivalry between EX and SAE.

Once again, the storytellers delivered, reducing the audience to belly rolling laughter while also offering bigger perspective and inspiration. If you want more detail, you have to come to The Lowdown in 2018. That will take place next Fall on a football weekend, and we’ll make sure to schedule it well in advance so that you can attend next year.